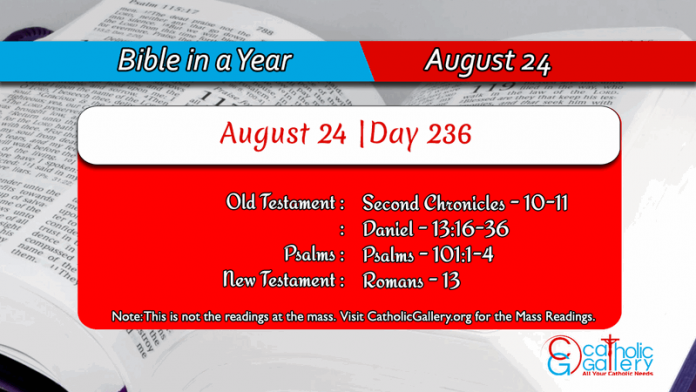 1 Now Rehoboam set out for Shechem. For in that place all of Israel had convened, so that they might appoint him as king.

2 But when Jeroboam, the son of Nabat, who was in Egypt, (indeed he had fled to that place from Solomon) had heard it, he promptly returned.

3 And they summoned him, and he arrived with all of Israel. And they spoke to Rehoboam, saying:

4 Your father pressed upon us a very difficult yoke. You should govern us more lightly than your father, who imposed on us a heavy servitude, and so lift up some of the burden, so that we may serve you.

5 But he said, “Return to me after three days.” And when the people had gone away,

6 he took counsel with the elders, who had stood before his father Solomon while he was still living, saying, “What counsel would you give to me, so that I may respond to the people?”

7 And they said to him, “If you please this people, and if you soothe them with words of clemency, they will be your servants for all days.”

8 But he set aside the counsel of the elders, and he began to have discussion with the youth, who had been raised with him and who were among his companions.

9 And he said to them: “How does it seem to you? Or how should I respond to this people, who have said to me, ‘Lift up the yoke that your father imposed upon us?’ “

10 But they responded like youths, having been raised with him in luxury, and they said: “So shall you speak to the people, who said to you, ‘Your father made our yoke heavy; you should lighten it,’ and so shall you respond to them: ‘My little finger is thicker than the back of my father.

11 My father imposed a heavy yoke upon you, and I will place more weight upon it. My father cut you with whips; truly, I will beat you with scorpions.’ “

12 Then Jeroboam, and the entire people, went to Rehoboam on the third day, just as he had instructed them.

13 And the king responded harshly, abandoning the counsel of the elders.

14 And he spoke according to the will of the youths: “My father imposed a heavy yoke upon you, which I will make heavier. My father cut you with whips; truly, I will beat you with scorpions.”

15 And he did not acquiesce to the pleadings of the people. For it was the will of God that his word be fulfilled, which he had spoken by the hand of Ahijah, the Shilonite, to Jeroboam, the son of Nabat.

16 Then the entire people, speaking more harshly to the king, spoke to him in this way: “There is no portion for us in David, and there is no inheritance in the son of Jesse. Return to your dwellings, O Israel. Then you, O David, shall pasture your own house.” And Israel went away to their dwellings.

17 But Rehoboam reigned over the sons of Israel who were living in the cities of Judah.

18 And king Rehoboam sent Aduram, who was in charge of the tributes. And the sons of Israel stoned him, and he died. And so king Rehoboam hurried to climb into the chariot, and he fled to Jerusalem.

19 And Israel withdrew from the house of David, even to this day.

1 Then Rehoboam went to Jerusalem, and he called together the entire house of Judah and of Benjamin, one hundred eighty thousand elect men of war, so that he might contend against Israel, and turn back his kingdom to himself.

2 And the word of the Lord came to Shemaiah, the man of God, saying:

3 Speak to Rehoboam, the son of Solomon, the king of Judah, and to all of Israel who are of Judah, or of Benjamin:

4 Thus says the Lord: You shall not ascend and fight against your brothers. Let each one return to his own house. For it is by my will that this has happened.” And when they had heard the word of the Lord, they turned back, and they did not continue on against Jeroboam.

5 Then Rehoboam lived in Jerusalem, and he built fortified cities in Judah.

6 And he built up Bethlehem, and Etam, and Tekoa,

7 and also Bethzur, and Soco, and Adullam,

9 then too Adoram, and Lachish, and Azekah,

10 as well as Zorah, and Aijalon, and Hebron, which were very fortified cities in Judah and in Benjamin.

11 And when he had enclosed them with walls, he placed in them rulers, and storehouses of provisions, that is, of oil and wine.

12 Moreover, in each city he made an armory of shields and spears, and he strengthened them with the utmost diligence. And he ruled over Judah and Benjamin.

13 Then the priests and Levites, who were in all of Israel, came to him from all their settlements,

14 leaving behind their suburbs and possessions, and crossing over to Judah and to Jerusalem. For Jeroboam and his followers had cast them out, so that they could not exercise the priestly office to the Lord.

15 And he appointed for himself priests of high places, and of demons, and of calves that he had made.

16 Moreover, out of all the tribes of Israel, whosoever would give their heart so that they sought the Lord God of Israel, they went to Jerusalem to immolate their victims before the Lord, the God of their fathers.

19 They bore sons for him: Jeush, and Shemariah, and Zaham.

20 And also after her, he married Maacah, the daughter of Absalom, who bore for him Abijah, and Attai, and Ziza, and Shelomith.

21 But Rehoboam loved Maacah, the daughter of Absalom, above all his wives and concubines. For he had taken eighteen wives and sixty concubines. And he conceived twenty-eight sons and sixty daughters.

22 Truly, he appointed as the head, Abijah, the son of Maacah, to be the ruler over all his brothers. For he thought to make him king,

23 since he was wiser and more powerful than all his sons, even in all the regions of Judah and Benjamin, and in all the fortified cities. And he provided them with very much food, and he sought many wives.

16 And there was no one there, except the two elders in hiding, and they were studying her.

17 And so she said to the maids, “Bring me oil and ointments, and shut the doors of the orchard, so that I may wash.”

18 And they did as she ordered them. And they shut the doors of the orchard and left through a back door to fetch what she required, and they did not know that the elders were hiding within.

19 But when the maids had departed, the two elders arose and hurried to her, and they said,

20 Behold, the doors of the orchard are closed, and no one can see us, and we are in desire for you. Because of these things, consent to us and lie with us.

21 But if you will not, we will bear witness against you that a young man was with you and, for this reason, you sent your maids away from you.”

22 Susanna sighed and said, “I am closed in on every side. For if I do this thing, it is death to me; yet if I do not do it, I will not escape your hands.

23 But it is better for me to fall unavoidably into your hands, than to sin in the sight of the Lord.”

24 And Susanna cried out with a loud voice, but the elders also cried out against her.

25 And one of them hurried to the door of the orchard and opened it.

26 And so, when the servants of the house heard the outcry in the orchard, they rushed in by the back door to see what was happening.

27 But after the old men had spoken, the servants were greatly ashamed, for there had never been anything of this kind said about Susanna. And it happened on the next day,

28 when the people came to Joakim her husband, that the two appointed elders also came, full of wicked plans against Susanna, in order to put her to death.

29 And they said before the people, “Send for Susanna, daughter of Hilkiah, the wife of Joakim.” And immediately they sent for her.

30 And she arrived with her parents, and sons, and all her relatives.

31 Moreover, Susanna was exceedingly delicate and beautiful in appearance.

32 But those wicked ones commanded that her face should be uncovered, (for she was covered,) so that at least they might be satisfied with her beauty.

33 Therefore, her own and all who knew her wept.

34 Yet the two appointed elders, rising up in the midst of the people, set their hands upon her head.

35 And weeping, she gazed up to heaven, for her heart had faith in the Lord.

36 And the appointed elders said, “While we were talking a walk in the orchard alone, this one came in with two maids, and she shut the doors of the orchard, and she sent the maids away from her.

1 A psalm for David himself. Mercy and judgment I will sing to thee, O Lord: I will sing,

2 And I will understand in the unspotted way, when thou shalt come to me. I walked in the innocence of my heart, in the midst of my house.

3 I did not set before my eyes any unjust thing: I hated the workers of iniquities.

4 The perverse heart did not cleave to me: and the malignant, that turned aside from me, I would not know.

1 Let every soul be subject to higher authorities. For there is no authority except from God and those who have been ordained by God.

2 And so, whoever resists authority, resists what has been ordained by God. And those who resist are acquiring damnation for themselves.

5 For this reason, it is necessary to be subject, not solely because of wrath, but also because of conscience.

6 Therefore, you must also offer tribute. For they are the ministers of God, serving him in this.

7 Therefore, render to all whatever is owed. Taxes, to whom taxes is due; revenue, to whom revenue is due; fear, to whom fear is due; honor, to whom honor is due.

8 You should owe nothing to anyone, except so as to love one another. For whoever loves his neighbor has fulfilled the law.

10 The love of neighbor does no harm. Therefore, love is the plenitude of the law.

11 And we know the present time, that now is the hour for us to rise up from sleep. For already our salvation is closer than when we first believed.

12 The night has passed, and the day draws near. Therefore, let us cast aside the works of darkness, and be clothed with the armor of light.

13 Let us walk honestly, as in the daylight, not in carousing and drunkenness, not in promiscuity and sexual immorality, not in contention and envy.

14 Instead, be clothed with the Lord Jesus Christ, and make no provision for the flesh in its desires.