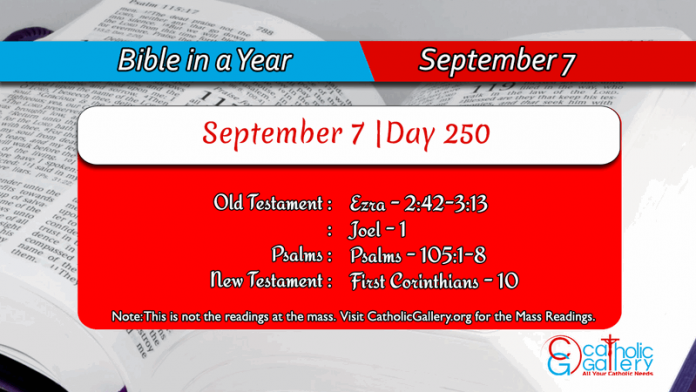 58 all the temple servants and the sons of the servants of Solomon, three hundred ninety-two.

59 And these were the ones who ascended from Telmelah, Telharsha, Cherub, and Addan, and Immer. And they were not able to indicate the house of their fathers and their offspring, whether they were of Israel:

62 These sought the writing of their genealogy, and they did not find it, and so they were cast out of the priesthood.

63 And the cupbearer said to them that they should not eat from the Holy of Holies, until there would arise a priest, learned and perfect.

65 not including their men and women servants, of whom there were seven thousand three hundred thirty-seven. And among these were singing men and singing women, two hundred.

66 Their horses were seven hundred thirty-six; their mules were two hundred forty-five;

68 And some of the leaders among the fathers, when they entered into the temple of the Lord, which is in Jerusalem, freely offered some of these to the house of God, in order to construct it in its location.

69 They gave to the expenses of the work in accord with their ability: sixty-one thousand gold coins, five thousand silver minas, and one hundred priestly vestments.

1 And now the seventh month had arrived, and the sons of Israel were in their cities. Then, the people were gathered together, like one man, in Jerusalem.

3 Now they set the altar of God upon its bases, while keeping the people of all the surrounding lands away from it. And they offered upon it a holocaust to the Lord, morning and evening.

4 And they kept the solemnity of tabernacles, just as it was written, and the holocaust of each day in order, according to the precept, the work of each day in its time.

5 And after these, they offered the continual holocaust, as much on the new moons as on all the solemnities of the Lord that were consecrated, and on all those when a voluntary gift was offered to the Lord.

6 From the first day of the seventh month, they began to offer holocausts to the Lord. But the temple of God had not yet been founded.

7 And so they gave money to those who cut and laid stones. Similarly, they gave food, and drink, and oil to the Sidonians and the Tyrians, so that they would bring cedar wood, from Lebanon to the sea at Joppa, in accord with what had been commanded of them by Cyrus, the king of the Persians.

8 Then, in the second year of their advent to the temple of God in Jerusalem, in the second month, Zerubbabel, the son of Shealtiel, and Jeshua, the son of Jozadak, and the remainder of their brothers, the priests, and the Levites, and all who had arrived from the captivity to Jerusalem, began, and they appointed Levites, from twenty years and over, to hasten the work of the Lord.

10 And when the builders had founded the temple of the Lord, the priests stood in their adornment with trumpets, and the Levites, the sons of Asaph, stood with cymbals, so that they might praise God by the hand of David, the king of Israel.

11 And they sung together with hymns and confession to the Lord: “For he is good. For his mercy is over Israel unto eternity.” And likewise, all the people shouted with a great clamor in praise to the Lord, because the temple of the Lord had been founded.

12 And many of the priests and the Levites, and the leaders of the fathers and of the elders, who had seen the former temple, when now this temple was founded and was before their eyes, wept with a great voice. And many of them, shouting for joy, lifted up their voice.

1 The word of the Lord that came to Joel, the son of Pethuel.

2 Listen to this, elders, and pay close attention, all inhabitants of the land. Did this ever happen in your days or in the days of your fathers?

5 Rouse yourselves, you drunkards, and weep and wail, all you who delight in drinking wine; for it has been cut off from your mouth.

6 For a nation has ascended over my land: strong and without number. His teeth are like the teeth of a lion, and his molars are like that of a lion’s young.

7 He has put my vineyard into desolation, and he has pulled off the bark of my fig tree. He has stripped it bare and cast it away; its branches have become white.

8 Lament like a betrothed virgin, wrapped in sackcloth at the loss of the husband of her youth.

9 Sacrifice and libation have perished from the house of the Lord; the priests who are ministers of the Lord have mourned.

10 The region has been depopulated, the soil has mourned. For the wheat has been devastated, the wine has been disfigured, the oil has languished.

11 The farmers have been confounded, the vineyard workers have wailed over the crop and the barley, because the harvest of the field has perished.

12 The vineyard is in ruin, and the fig tree has languished. The pomegranate tree, and the palm tree, and the fruit tree, and all the trees of the field have withered. For joy has been thrown into disorder before the sons of men.

13 Priests, gird yourselves and lament. Ministers of the altars, wail. Enter, ministers of my God, lie in sackcloth. For sacrifice and libation have passed away from the house of your God.

14 Sanctify a fast, call an assembly, gather the elders and all the inhabitants of the land into the house of your God. And cry out to the Lord:

15 Ah, ah, ah, the day! For the day of the Lord is near, and it will arrive, like a devastation, before the powerful.

16 Has not your nourishment perished from before your eyes, joy and gladness from the house of our God?

17 The mules have rotted in their own manure, the barns have been demolished, the wine cellars have been destroyed, because the grain has been ruined.

18 Why have the animals groaned, the herds of cattle bellowed? because there is no pasture for them. Yes, and even the flocks of sheep have been lost.

19 To you, O Lord, I will cry out, because fire has devoured the beauty of the wilderness, and the flame has burned all the trees of the countryside.

20 Yes, and even the beasts of the field have gazed up at you, like the dry ground thirsting for rain, because the fountains of waters have dried up, and fire has devoured the beauty of the wilderness.

5 Remember his marvellous works which he hath done; his wonders, and the judgments of his mouth.

1 For I do not want you to be ignorant, brothers, that our fathers were all under the cloud, and they all went across the sea.

2 And in Moses, they all were baptized, in the cloud and in the sea.

3 And they all ate of the same spiritual food.

4 And they all drank of the same spiritual drink. And so, they all were drinking of the spiritual rock seeking to obtain them; and that rock was Christ.

5 But with most of them, God was not well-pleased. For they were struck down in the desert.

6 Now these things were done as an example for us, so that we might not desire evil things, just as they desired.

7 And so, do not take part in idolatry, as some of them did, just as it was written: “The people sat down to eat and to drink, and then they rose up to amuse themselves.”

8 And let us not commit fornication, as some of them fornicated, and so twenty-three thousand fell on one day.

9 And let us not tempt Christ, as some of them tempted, and so they perished by serpents.

10 And you should not murmur, as some of them murmured, and so they perished by the destroyer.

11 Now all of these things happened to them as an example, and so they have been written for our correction, because the final age has fallen upon us.

12 And so, whosoever considers himself to be standing, let him be careful not to fall.

13 Temptation should not take hold of you, except what is human. For God is faithful, and he will not permit you to be tempted beyond your ability. Instead, he will effect his Providence, even during temptation, so that you may be able to bear it.

14 Because of this, most beloved of mine, flee from the worship of idols.

15 Since I am speaking to those who are prudent, judge what I say for yourselves.

18 Consider Israel, according to the flesh. Are not those who eat from the sacrifices partakers of the altar?

19 What is next? Should I say that what is immolated to idols is anything? Or that the idol is anything?

20 But the things that the Gentiles immolate, they immolate to demons, and not to God. And I do not want you to become partakers with demons.

22 Or should we provoke the Lord to jealousy? Are we stronger than he is? All is lawful to me, but not all is expedient.

23 All is lawful to me, but not all is edifying.

24 Let no one seek for himself, but for others.

25 Whatever is sold in the market, you may eat, without asking questions for the sake of conscience.

26 The earth and all its fullness belong to the Lord.

27 If you are invited by any unbelievers, and you are willing to go, you may eat whatever is set before you, without asking questions for the sake of conscience.

30 If I partake with thanksgiving, why should I be slandered over that for which I give thanks?

31 Therefore, whether you eat or drink, or whatever else you may do, do everything for the glory of God.