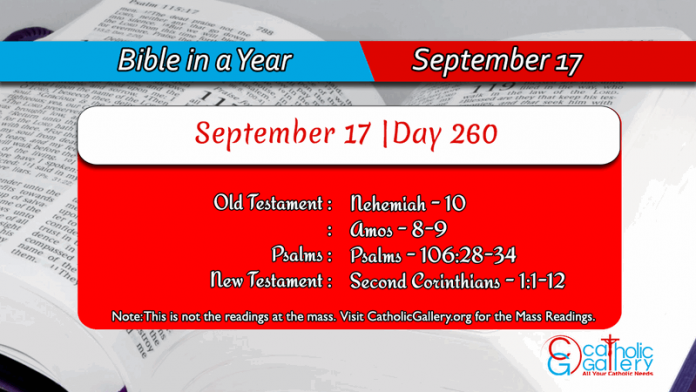 1 And the signatories were: Nehemiah, the cupbearer, the son of Hacaliah, and Zedekiah,

9 And the Levites were: Jeshua, the son of Azaniah, Binnui of the sons of Henadad, Kadmiel,

28 And the rest of the people were the priests, the Levites, the gatekeepers, and the singers, the temple servants, and all who had separated themselves, from the peoples of the lands, to the law of God, with their wives, their sons, and their daughters.

29 All who were able to understand, pledged on behalf of their brothers, with their nobles, and they came forward to promise and to swear that they would walk in the law of God, which he had given to the hand of Moses, the servant of God, that they would do and keep all the commandments of the Lord our God, and his judgments and his ceremonies,

32 And we established precepts over ourselves, so that we would give one third part of a shekel each year for the work of the house of our God,

34 Then we cast lots concerning the oblation of the wood among the priests, and the Levites, and the people, so that it would be carried into the house of our God, by the households of our fathers, at set times, from the times of one year to another, so that they might burn upon the altar of the Lord our God, just as it was written in the law of Moses,

37 and so that we might bring in the first-fruits of our foods, and of our libations, and the fruits of every tree, also of the vintage and of the oil, to the priests, to the storehouse of our God, with the tithes of our land for the Levites. The Levites also shall receive tithes from our works out of all the cities.

39 For the sons of Israel and the sons of Levi shall carry to the storehouse the first-fruits of the grain, of the wine, and of the oil. And the sanctified vessels shall be there, and the priests, and the singing men, and the gatekeepers, and the ministers. And we shall not forsake the house of our God.

1 These things the Lord has revealed to me. And behold, a hook to draw down fruit.

2 And he said, “What do you see, Amos?” And I said, “A hook to draw down fruit.” And the Lord said to me, “The end has come for my people Israel. I will no longer pass through them.”

3 And the hinges of the temple will creak in that day, says the Lord God. Many will die. Silence will be thrown away in all places.

4 Hear this, you who crush the poor and who make those in need of land to do without.

5 You say, “When will the first day of the month be over, so we can sell our wares, and the sabbath, so we can open the grain: in order that we may decrease the measure, and increase the price, and substitute deceitful scales,

6 in order that we may possess the destitute with money, and the poor for a pair of shoes, and may sell even the refuse of the grain?”

7 The Lord has sworn by the arrogance of Jacob: I will not forget, even to the end, all their works.

8 Will not the earth shudder over this, and all its inhabitants mourn, and all rise up like a river, and be cast out, and flow away like the river of Egypt?

9 And it will be in that day, says the Lord God, that the sun will decline at midday, and I will cause the earth to become dark on the day of light.

10 And I will turn your feasts into mourning, and all your hymns into lamentation. And I will put sackcloth over every one of your backs, and baldness on every head. And I will begin it like the mourning for an only-begotten son, and complete it like a bitter day.

11 Behold, the days pass, says the Lord, and I will send a famine on the earth: not a famine of bread, nor of thirst for water, but for hearing the word of the Lord.

12 And they will move even from sea to sea, and from the North all the way to the East. They will wander around seeking the word of the Lord, and they will not find it.

13 In that day, beautiful virgins, and young men, will fail because of thirst.

14 They swear by the offense of Samaria, and they say, “As your God lives, Dan,” and “The way of Beer-sheba lives.” And they will fall, and they will not rise up any more.

1 I saw the Lord standing over an altar, and he said: “Strike the hinges, and let the lintels be shaken. For there is avarice at the head of them all, and I will execute the very last of them with the sword. There will be no escape for them. They will flee, and he who flees from among them will not be saved.

3 And if they were hiding at the top of Carmel, when searching there, I would steal them away, and if they conceal themselves from my eyes in the depths of the sea, I will command the serpent there and he will bite them.

4 And if they go into captivity in the sight of their enemies, there I will command the sword, and it will kill them. And I will set my eyes over them for harm and not for good.”

5 And the Lord God of hosts, he touches the earth and it will melt. And all who dwell in it will mourn. And everyone will rise up like a river, and will flow away like the river of Egypt.

6 He establishes his ascension into heaven, and he has founded his bundle on the earth. He calls the waters of the ocean, and pours them over the face of the earth. The Lord is his name.

7 Sons of Israel, are you not like the sons of the Ethiopians to me, says the Lord? Did I not cause Israel to rise up out of the land of Egypt, and the Philistines out of Cappadocia, and the Syrians out of Cyrene?

8 Behold, the eyes of the Lord God are on the sinning kingdom, and I will wipe it from the face of the earth. Though truly, when destroying, I will not wipe away the house of Jacob, says the Lord.

9 For behold, I will command, and I will sift the house of Israel among all the nations, as wheat is sifted in a sieve. And not even one small stone will fall to the ground.

10 All the sinners of my people will die by the sword. They say, “Disaster will not come near us, and it will not overcome us.”

11 In that day, I will raise up the tabernacle of David, which is fallen. And I will repair the breaches in its walls, and I will restore that which collapsed. And I will rebuild it, just as in the days of antiquity,

12 so that they may possess the remnant of Idumea and all the nations, for my name has been invoked over them, says the Lord who does this.

14 And I will turn back the captivity of my people Israel. And they will rebuild the deserted cities and inhabit them. And they will plant vineyards and drink their wine. And they will create gardens and eat their fruits.

15 And I will plant them on their own soil. And I will no longer root them out of their own land, which I have given them, says the Lord your God.

28 They also were initiated to Beelphegor: and ate the sacrifices of the dead.

29 And they provoked him with their inventions: and destruction was multiplied among them.

30 Then Phinees stood up, and pacified him: and the slaughter ceased.

31 And it was reputed to him unto justice, to generation and generation for evermore.

32 They provoked him also at the waters of contradiction: and Moses was afflicted for their sakes:

33 Because they exasperated his spirit. And he distinguished with his lips.

34 They did not destroy the nations of which the Lord spoke unto them.

1 Paul, an Apostle of Jesus Christ by the will of God, and Timothy, a brother, to the church of God which is at Corinth, with all the saints who are in all of Achaia:

2 Grace and peace to you from God our Father and from the Lord Jesus Christ.

3 Blessed be the God and Father of our Lord Jesus Christ, the Father of mercies and the God of all consolation.

4 He consoles us in all our tribulation, so that we too may be able to console those who are in any kind of distress, through the exhortation by which we also are being exhorted by God.

5 For just as the Passion of Christ abounds in us, so also, through Christ, does our consolation abound.

8 For we do not want you to be ignorant, brothers, about our tribulation, which happened to us in Asia. For we were weighed down beyond measure, beyond our strength, so that we became weary, even of life itself.

9 But we had within ourselves the response to death, so that we would not have faith in ourselves, but in God, who raises the dead.

10 He has rescued us, and he is rescuing us, from great peril. In him, we hope that that he will continue to rescue us.

11 And you are assisting, with your prayers for us, so that from many persons, by that which is a gift in us, thanks may be given through many persons, because of us.

12 For our glory is this: the testimony of our conscience, which is found in simplicity of heart and in sincerity toward God. And it is not with worldly wisdom, but in the grace of God, that we have conversed with this world, and more abundantly toward you.