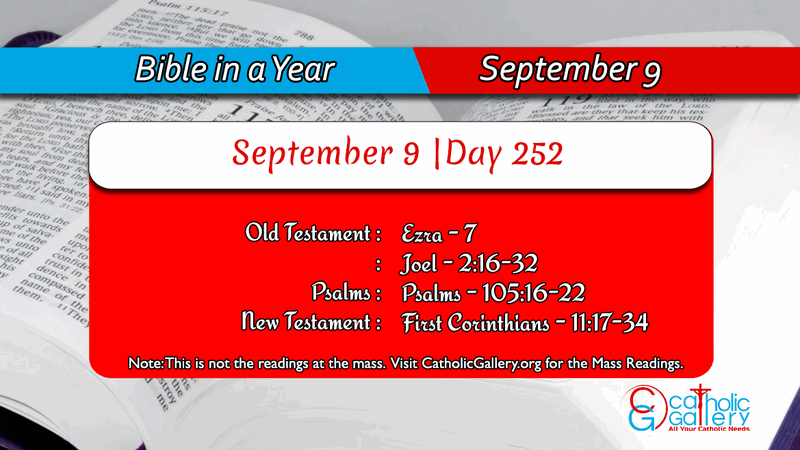 6 this same Ezra, ascended from Babylon; and he was a proficient scribe in the law of Moses, which the Lord God gave to Israel. And the king granted to him his every petition. For the hand of the Lord, his God, was over him.

8 And they arrived at Jerusalem in the fifth month, in the same seventh year of the king.

11 Now this is a copy of the letter of the edict, which king Artaxerxes gave to Ezra, the priest, a scribe well-taught in the words and precepts of the Lord and in his ceremonies in Israel:

12 Artaxerxes, king of kings, to Ezra, the priest, a very learned scribe of the law of the God of heaven: a greeting.

13 It has been decreed by me, that whosoever wishes, among the people of Israel and their priests and Levites within my kingdom, to go to Jerusalem, may go with you.

14 For you have been sent from the face of the king and his seven counselors, so that you may visit Judea and Jerusalem by the law of your God, which is in your hand,

15 and so that you may carry the silver and gold, which the king and his counselors have freely offered to the God of Israel, whose tabernacle is in Jerusalem.

16 And all the silver and gold, as much as you will find in the entire province of Babylon, and which the people will wish to offer, and which some of the priests will offer freely to the house of their God, which is in Jerusalem,

17 accept it freely. And with this money, carefully purchase calves, rams, lambs, and their sacrifices and libations, and offer these upon the altar of the temple of your God, which is in Jerusalem.

18 But also, whatever it will please you and your brothers to do with the remainder of the silver and gold, do so in accord with the will of your God.

19 Likewise, the vessels that have been given to you for the ministry of the house of your God, deliver these to the sight of God in Jerusalem.

20 Then, whatever more will be needed for the house of your God, as much as is necessary for you to spend, it shall be given from the treasury, and from the king’s finances,

21 and by me. I, king Artaxerxes, have appointed and decreed to all the keepers of the public treasury, those who are beyond the river, that whatever Ezra, the priest, a scribe of the law of the God of heaven, shall ask of you, you shall provide it without delay,

24 Likewise, we would make known to you, about all the priests, and the Levites, and the singers, and the gatekeepers, and the temple servants, and the ministers of the house of this God, that you have no authority to impose tax, or tribute, or duty upon them.

26 And any one who will not diligently keep the law of your God, and the law of the king, judgment shall be upon him, either to death, or to exile, or to the confiscation of his goods, or certainly to prison.”

27 Blessed be the Lord, the God of our fathers, who has put this into the heart of the king, so that he may glorify the house of the Lord, which is in Jerusalem.

28 For he has turned his mercy toward me in the sight of the king, and his counselors, and all the powerful leaders of the king. And so, having been strengthened by the hand of the Lord, my God, which was upon me, I gathered together some of the leaders of Israel, those who were to go up with me.

16 Gather the people, sanctify the church, unite the elders, gather together the little ones and infants at the breast. Let the bridegroom depart from his bed, and the bride from her bridal chamber.

17 Between the vestibule and the altar, the priests, the ministers of the Lord, will weep, and they will say: “Spare, O Lord, spare your people. And do not bequeath your inheritance into disgrace, so that the nations would rule over them. Why should they say among the peoples, ‘Where is their God?’?

18 The Lord has been zealous for his land, and he has spared his people.

19 And the Lord responded, and he said to his people: “Behold, I will send you grain and wine and oil, and you will again be filled with them. And I will no longer give you disgrace among the Gentiles.

20 And he who is from the North, I will drive far from you. And I will expel him into an impassable land, and into the desert, with his face opposite the Eastern sea, and his furthest part towards the furthest sea. And his stench will ascend, and his rottenness will ascend, because he has acted arrogantly.

21 Earth, do not be afraid. Exult and rejoice. For the Lord has great esteem for what he has done.

22 Animals of the countryside, do not be afraid. For the beauty of the wilderness has sprung forth. For the tree has borne its fruit. The fig tree and the vine have bestowed their virtue.

23 And you, sons of Zion, exult and rejoice in the Lord your God. For he has given you a teacher of justice, and he will make the early and the late rains descend to you, just as it was in the beginning.

24 And the threshing floors will be filled with grain, and the presses will overflow with wine and oil.

25 And I will repay you for the years which the locust, and the beetle, and the mildew, and the caterpillar consumed: my great strength which I sent upon you.

26 And you will eat with enjoyment, and you will be satisfied, and you will praise the name of the Lord your God, who has worked miracles with you, and my people will not be confounded forever.

27 And you will know that I am in the midst of Israel, and I am the Lord your God, and there is no other, and my people will not be confounded forever.

28 And after this, it will happen that I will pour out my spirit upon all flesh, and your sons and your daughters will prophesy; your elders will dream dreams, and your youths will see visions.

29 Moreover, in those days I will pour out my spirit upon my servants and handmaids.

30 And I will grant wonders in the sky and on earth: blood and fire and the vapor of smoke.

31 The sun will be turned into darkness, and the moon into blood, before the great and terrible day of the Lord shall arrive.

32 And it will happen that everyone who will call upon the name of the Lord will be saved. For on Mount Zion, and in Jerusalem, and in the remnant whom the Lord will call, there will be salvation, just as the Lord has said.

16 And he called a famine upon the land: and he broke in pieces all the support of bread.

17 He sent a man before them: Joseph, who was sold for a slave.

18 They humbled his feet in fetters: the iron pierced his soul,

19 Until his word came. The word of the Lord inflamed him.

20 The king sent, and he released him: the ruler of the people, and he set him at liberty.

21 He made him master of his house, and ruler of all his possession.

22 That he might instruct his princes as himself, and teach his ancients wisdom.

17 Now I caution you, without praising, about this: that you assemble together, and not for better, but for worse.

18 First of all, indeed, I hear that when you assemble together in the church, there are schisms among you. And I believe this, in part.

19 For there must also be heresies, so that those who have been tested may be made manifest among you.

20 And so, when you assemble together as one, it is no longer in order to eat the Lord’s supper.

21 For each one first takes his own supper to eat. And as a result, one person is hungry, while another is inebriated.

22 Do you not have houses, in which to eat and drink? Or do you have such contempt for the Church of God that you would confound those who do not have such contempt? What should I say to you? Should I praise you? I am not praising you in this.

23 For I have received from the Lord what I have also delivered to you: that the Lord Jesus, on the same night that he was handed over, took bread,

24 and giving thanks, he broke it, and said: “Take and eat. This is my body, which shall be given up for you. Do this in remembrance of me.”

25 Similarly also, the cup, after he had eaten supper, saying: “This cup is the new covenant in my blood. Do this, as often as you drink it, in remembrance of me.”

26 For whenever you eat this bread and drink this cup, you proclaim the death of the Lord, until he returns.

27 And so, whoever eats this bread, or drinks from the cup of the Lord, unworthily, shall be liable of the body and blood of the Lord.

28 But let a man examine himself, and, in this way, let him eat from that bread, and drink from that cup.

30 As a result, many are weak and sick among you, and many have fallen asleep.

31 But if we ourselves were discerning, then certainly we would not be judged.

32 Yet when we are judged, we are being corrected by the Lord, so that we might not be condemned along with this world.

33 And so, my brothers, when you assemble together to eat, be attentive to one another.

34 If anyone is hungry, let him eat at home, so that you may not assemble together unto judgment. As for the rest, I will set it in order when I arrive.