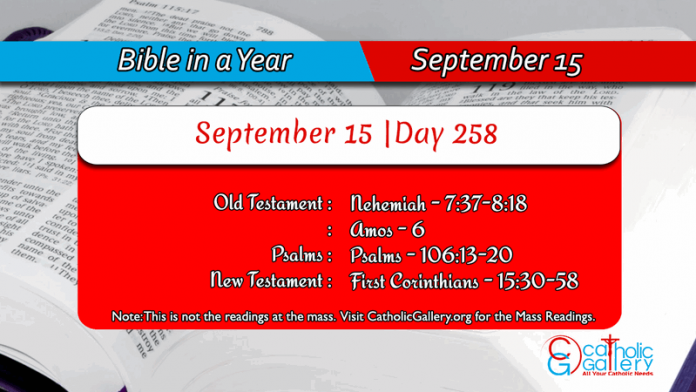 37 The sons of Lod, Hadid, and Ono, seven hundred twenty-one.

39 The priests: the sons of Jedaiah in the house of Jeshua, nine hundred seventy-three.

40 The sons of Immer, one thousand fifty-two.

41 The sons of Pashhur, one thousand two hundred forty-seven.

42 The sons of Harim, one thousand and seventeen.

43 The Levites: the sons of Jeshua and Kadmiel, the sons

44 of Hodaviah, seventy-four. The singing men:

45 the sons of Asaph, one hundred forty-eight.

60 All the temple servants and the sons of the servants of Solomon, three hundred ninety-two.

61 Now these are the ones who ascended from Telmelah, Telharsha, Cherub, Addon, and Immer; and they were not able to indicate the house of their fathers and their offspring, whether they were of Israel:

64 These sought their writing in the census, and they did not find it, and so they were cast out of the priesthood.

65 And the cupbearer said to them that they should not eat from the Holy of Holies, until a priest would stand up who was learned and skillful.

66 The entire multitude, which was like one man, was forty-two thousand three hundred sixty,

67 aside from their men and women servants, who were seven thousand three hundred thirty-seven, and among them were singing men and singing women, two hundred forty-five.

68 Their horses were seven hundred thirty-six; their were mules two hundred forty-five.

70 Now several of the leaders of the families gave to the work. The cupbearer gave to the treasury one thousand drachmas of gold, fifty bowls, and five hundred thirty priestly garments.

71 And some of the leaders of the families gave to the treasury of the work twenty thousand drachmas of gold, and two thousand two hundred minas of silver.

72 And what the remainder of the people gave was twenty thousand drachmas of gold, and two thousand minas of silver, and sixty-seven priestly garments.

73 Now the priests, and the Levites, and the gatekeepers, and the singing men, and the rest of the common people, and the temple servants, and all of Israel dwelt in their own cities.

1 And the seventh month had arrived. Now the sons of Israel were in their cities. And all the people were gathered together, like one man, in the street which is before the water gate. And they spoke to Ezra the scribe, so that he would bring the book of the law of Moses, which the Lord had instructed to Israel.

2 Therefore, Ezra the priest brought the law before the multitude of men and women, and all those who were able to understand, on the first day of the seventh month.

3 And he read it openly in the street which was before the water gate, from morning even until midday, in the sight of the men and women, and those who understood. And the ears of all the people were attentive to the book.

4 Then Ezra the scribe stood upon a step of wood, which he had made for speaking. And standing beside him were Mattithiah, and Shemaiah, and Anaiah, and Uriah, and Hilkiah, and Maaseiah, on his right. And on the left were Pedaiah, Mishael, and Malchijah, and Hashum, and Hashbaddanah, Zechariah, and Meshullam.

6 And Ezra blessed the Lord, the great God. And all the people responded, “Amen, Amen,” lifting up their hands. And they bowed down, and they adored God, facing the ground.

7 Then Jeshua, and Bani, and Sherebiah, Jamin, Akkub, Shabbethai, Hodiah, Maaseiah, Kelita, Azariah, Jozabad, Hanan, Pelaiah, the Levites, caused the people to be silent in order to hear the law. And the people were standing on their feet.

8 And they read from the book of the law of God, distinctly and plainly, so as to be understood. And when it was read, they did understand.

9 Then Nehemiah (the same is the cupbearer) and Ezra, the priest and scribe, and the Levites, who were interpreting for all the people, said: “This day has been sanctified to the Lord our God. Do not mourn, and do not weep.” For all of the people were weeping, as they were listening to the words of the law.

10 And he said to them: “Go, eat fat foods and drink sweet drinks, and send portions to those who have not prepared for themselves. For it is the holy day of the Lord. And do not be sad. For the joy of the Lord is also our strength.”

11 Then the Levites caused the people to be silent, saying: “Be quiet. For the day is holy. And do not be sorrowful.”

13 And on the second day, the leaders of the families of all the people, the priests, and the Levites were gathered together to Ezra the scribe, so that he might interpret for them the words of the law.

14 And they found written in the law, which the Lord had instructed by the hand of Moses, that the sons of Israel should live in tabernacles on the day of solemnity in the seventh month,

17 Therefore, the entire assembly of those who had returned from the captivity made tabernacles and lived in tabernacles. For from the days of Jeshua, the son of Nun, even to that day, the sons of Israel had not done so. And there was exceedingly great rejoicing.

18 Now he read in the book of the law of God, throughout each day, from the first day even to the very last day. And they kept the solemnity for seven days. And on the eighth day, there was a gathering according to the ritual.

1 Woe to you who have been wealthy in Zion, and to you who have confidence in the mountain of Samaria: aristocrats, heads of the people, who advance with a retinue into the house of Israel.

2 Cross over to Calneh and see, and go from there into Hamath the great, and descend into Gath of the Philistines, and to the best kingdoms of these, if their limits are wider than your limits.

3 You have been set aside for the day of disaster, and you approach the throne of iniquity.

4 You sleep on beds of ivory, and you are lustful on your couches. You devour lambs from the flock and calves from the midst of the herd.

5 You sing to the sound of stringed instruments; they consider themselves to have the musical abilities of David.

6 You drink wine in bowls, and you anoint with the best ointments; and they suffer nothing over the grief of Joseph.

7 Because of this, now they will depart at the head of those who go into captivity; and the faction of the lustful will be removed.

8 The Lord God has sworn by his own soul, the Lord God of hosts says: I detest the arrogance of Jacob, and I hate his houses, and I will hand over the city with its inhabitants.

9 For if there were ten men remaining in one house, even they will die.

10 And his closest relative will steal him away and will burn him, so that he may carry the bones out of the house. And he will say to him that is in the inner most rooms of the house, “Now is there any left that still belongs to you?”

11 And he will answer, “It is finished.” And he will say to him, “Be silent and do not call to mind the name of the Lord.”

12 For behold, the Lord has commanded, and he will strike the greater house with catastrophes, and the lesser house with divisions.

13 Can horses gallop across rocks, or is anyone able to plough with gazelles? For you have turned judgment into bitterness and the fruit of justice into wormwood.

14 You rejoice in emptiness. You say, “Have we not, by our own strength, taken horns for ourselves?”

15 For behold, house of Israel, I will raise up a people over you, says the Lord God of hosts, and they will crush you from the entrance of Hamath all the way to the burning of the desert.

13 They had quickly done, they forgot his works: and they waited not for his counsels.

14 And they coveted their desire in the desert: and they tempted God in the place without water.

15 And he gave them their request: and sent fulness into their souls.

16 And they provoked Moses in the camp, Aaron the holy one of the Lord.

17 The earth opened and swallowed up Dathan: and covered the congregation of Abiron.

18 And a fire was kindled in their congregation: the flame burned the wicked.

30 Why also do we endure trials every hour?

31 Daily I die, by means of your boasting, brothers: you whom I have in Christ Jesus our Lord.

32 If, according to man, I fought with the beasts at Ephesus, how would that benefit me, if the dead do not rise again? “Let us eat and drink, for tomorrow we shall die.”

33 Do not be led astray. Evil communication corrupts good morals.

34 Be vigilant, you just ones, and do not be willing to sin. For certain persons have an ignorance of God. I say this to you with respect.

35 But someone may say, “How do the dead rise again?” or, “What type of body do they return with?”

36 How foolish! What you sow cannot be brought back to life, unless it first dies.

37 And what you sow is not the body that will be in the future, but a bare grain, such as of wheat, or of some other grain.

42 So it is also with the resurrection of the dead. What is sown in corruption shall rise to incorruption.

45 Just as it was written that the first man, Adam, was made with a living soul, so shall the last Adam be made with a spirit brought back to life.

46 So what is, at first, not spiritual, but animal, next becomes spiritual.

47 The first man, being earthly, was of the earth; the second man, being heavenly, will be of heaven.

50 Now I say this, brothers, because flesh and blood is not able to possess the kingdom of God; neither will what is corrupt possess what is incorrupt.

51 Behold, I tell you a mystery. Certainly, we shall all rise again, but we shall not all be transformed:

52 in a moment, in the twinkling of an eye, at the last trumpet. For the trumpet will sound, and the dead will rise up, incorruptible. And we shall be transformed.

54 And when this mortality has been clothed with immortality, then the word that was written shall occur: “Death is swallowed up in victory.”

56 Now the sting of death is sin, and the power of sin is the law.

57 But thanks be to God, who has given us victory through our Lord Jesus Christ.

58 And so, my beloved brothers, be steadfast and unmovable, abounding always in the work of the Lord, knowing that your labor is not useless in the Lord.