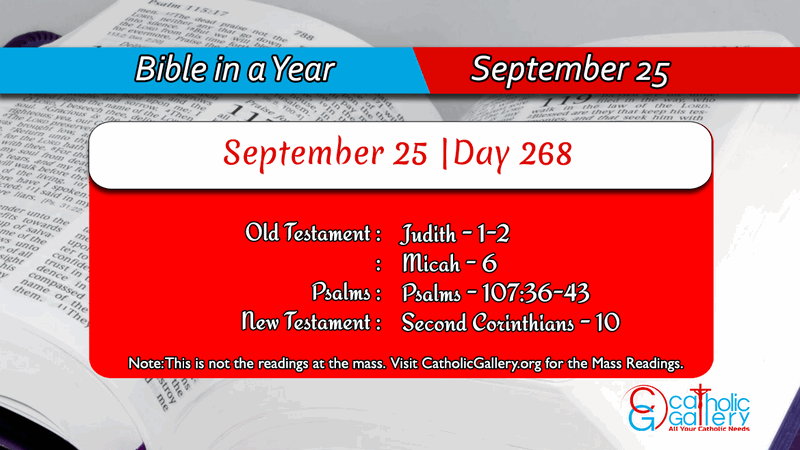 1 And so Arphaxad, king of the Medes, subjugated many nations under his authority, and he built a very powerful city, which he called Ecbatana.

3 In fact, at its corners, each side was extended for the space of twenty feet. And he set its gates according to the height of the towers.

4 And he glorified it, in its power, with the force of his army and with the glory of his chariots.

5 Thereafter, in the twelfth year of his reign, Nebuchadnezzar, king of the Assyrians, who reigned in Nineveh the great city, fought against Arphaxad and prevailed over him:

6 in the great plain, which is called Ragae, near the Euphrates, and the Tigris, and the Hydaspes, at the encampment of Arioch, king of the Elymaeans.

7 Then the kingdom of Nebuchadnezzar was exalted, and his heart was elevated. And he sent to all who dwelt in Cilicia, and Damascus, and Lebanon,

8 and to the nations that are in Carmel and Kedar, and to the inhabitants of Galilee, in the great plain of Esdrelon,

9 and to all who were in Samaria and across the river Jordan, even to Jerusalem and to all the land of Jesse, until one passes through to the borders of Ethiopia.

10 To all these, Nebuchadnezzar, king of the Assyrians, sent messengers:

11 whom they all with one mind contradicted, and they sent them back empty, and they rejected them without honor.

12 Then king Nebuchadnezzar, being indignant against all that land, swore by his throne and his kingdom that he would defend himself against all those regions.

2 And he called all the native leaders, and all the commanders, and his officers of war, and he met with them in his secret council.

3 And he said to them that his thoughts were to subjugate all the earth to his authority.

4 And when this saying pleased them all, king Nebuchadnezzar called Holofernes, the leader of his military.

5 And he said to him: “Go out against all the kingdoms of the west, and against those in particular who showed contempt for my authority.

6 Your eye must not spare any kingdom, and all the fortified cities you will subjugate to me.”

7 Then Holofernes called the commanders and the magistrates of the army of the Assyrians. And he numbered men for the expedition, just as the king had instructed him: one hundred and twenty thousand foot-soldiers, and twelve thousand archers on horseback.

8 And he caused his entire expeditionary force to go ahead with an innumerable multitude of camels, with whatever was needed in abundance for the armies, and with herds of cattle, and flocks of sheep, which could not be numbered.

9 He appointed grain to be prepared from all of Syria, as he passed through it.

10 In fact, he took up gold and silver from the house of the king in great abundance.

11 And he set out, he and all the army, with the four-horse chariots, and horsemen, and archers. And they covered the face of the earth like locusts.

12 And when he had crossed over the borders of the Assyrians, he came to the great mountains of Ange, which are on the left of Cilicia. And he ascended to all their castles, and he prevailed over all the fortifications.

13 Moreover, he broke open the renowned city of Melothus, and he pillaged all the sons of Tarshish, and the sons of Ishmael, who were opposite the face of the desert and to the south of the land of Cellon.

14 And he crossed over the Euphrates and came into Mesopotamia. And he crushed all the lofty cities that were there, from the torrent of Mambre, even until one passes through to the sea.

15 And he occupied its furthest regions, from Cilicia all the way to the coastlines of Japheth, which are towards the south.

16 And he carried away all the sons of Midian, and he plundered them in all their wealthy regions. And all who resisted him, he slew with the edge of the sword.

17 And after these things, he descended to the plains of Damascus, in the days of the harvest, and he set fire to all the crops, and he caused all the trees and the vineyards to be cut down.

18 And the fear of them fell upon all the inhabitants of the land.

1 Listen to what the Lord says: Rise, contend in judgment against the mountains, and let the hills hear your voice.

3 My people, what have I done to you, or how have I assailed you? Respond to me.

4 For I led you out of the land of Egypt, and I freed you from the house of servitude, and I sent before your face Moses, and Aaron, and Miriam.

5 My people, remember, I ask you, what Balak the king of Moab planned, and how Balaam the son of Beor responded to him, from Shittim even to Gilgal, so that you may know the justice of the Lord.

6 What worthy thing might I offer to the Lord, as I bend the knee before God on high? How could I offer holocausts to him, and one year-old calves?

7 Would the Lord be pleased with thousands of rams, or with many thousands of fat he-goats? How could I give up my firstborn because of my evil deed, the fruit of my womb because of the sin of my soul?

8 I will reveal to you, O man, what is good, and what the Lord requires from you, and how to act with judgment, and to love mercy, and to walk carefully with your God.

9 The voice of the Lord cries out to the city, “Listen, you tribes,” and who will confirm it? And salvation will be for those who fear your name.

10 Nevertheless, there is a fire in the house of the impious, the treasury of iniquity, and a small measure, filled with wrath.

11 Shall I justify unfaithful balances, and the deceitful weighing of a small bag?

12 By this, her wealthy have been filled with iniquity, and her inhabitants have spoken lies, and their tongue was deceitful in their mouth.

13 And I, therefore, began to strike you with perdition because of your sins.

14 You will consume and not be satisfied, and your humiliation will be in your midst. And you will take hold, and not save, and those whom you will save, I will deliver to the sword.

15 You will sow, and not reap. You will tread the olives, and not be anointed with oil, and crush the grapes, and not drink the wine.

16 For you have kept the precepts of Omri, and all the works of the house of Ahab. And you have walked according their wills, so that I should give you over to perdition and its hissing inhabitants, and you would carry the disgrace of my people.

36 And hath placed there the hungry; and they made a city for their habitation.

37 And they sowed fields, and planted vineyards: and they yielded fruit of birth.

38 And he blessed them, and they were multiplied exceedingly: and their cattle he suffered not to decrease.

39 Then they were brought to be few: and they were afflicted through the trouble of evils and sorrow.

40 Contempt was poured forth upon their princes: and he caused them to wander where there was no passing, and out of the way.

41 And he helped the poor out of poverty: and made him families like a flock of sheep.

42 The just shall see, and shall rejoice, and all iniquity shall stop their mouth.

43 Who is wise, and will keep these things: and will understand the mercies of the Lord?

1 But I myself, Paul, am begging you, through the meekness and modesty of Christ. I am certainly, by appearances, lowly among you, yet I have confidence in you, even while I am absent.

2 So I am petitioning you, lest I be bold, when present, with that bold confidence that I am considered to have by certain ones who judge us as if we were walking according to the flesh.

3 For though we walk in the flesh, we do not battle according to the flesh.

4 For the weapons of our battles are not carnal, yet still they are powerful with God, unto the destruction of fortifications: tearing down every counsel

5 and height that extols itself contrary to the wisdom of God, and leading every intellect into the captivity of obedience to Christ,

6 and standing ready to repudiate every disobedience, when your own obedience has been fulfilled.

8 And if I were even to glory somewhat more about our authority, which the Lord has given to us for your edification, and not for your destruction, I should not be ashamed.

9 But let it not be said that I am scaring you by means of epistles.

10 For they say: “His epistles, indeed, are weighty and strong. But his bodily presence is weak, and his speech is contemptible.”

11 Let someone like this realize that whatever we are in word through epistles, while absent: we are much the same in deed, while present.

13 Thus, we will not glory beyond our measure, but rather according to the measure of the limit which God has measured out to us, a measure which extends even to you.

14 For we are not overextending ourselves, as if we not able to reach as far as you are able. For we have gone even as far as you have in the Gospel of Christ.

15 We are not glorying immeasurably over the labors of others. Instead, we hold on to the hope of your growing faith, so as to be magnified in you, according to our own limits, but in abundance,

16 and even so as to evangelize in those places that are beyond you, not in order to glory in the measure of others, but rather in those things which have already been prepared.

17 But whoever glories, let him glory in the Lord.

18 For it is not he who commends himself who is approved, but rather he whom God commends.