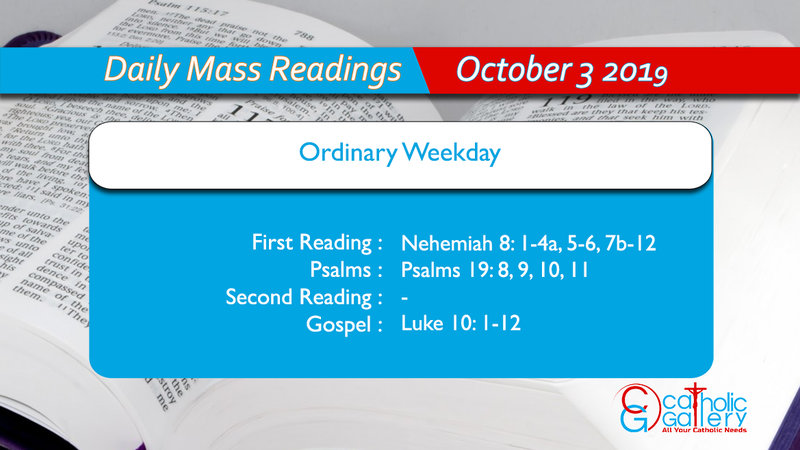 1 And the seventh month came: and the children of Israel were in their cities. And all the people were gathered together as one man to the street which is before the water gate, and they spoke to Esdras the scribe, to bring the book of the law of Moses, which the Lord had commanded to Israel.

2 Then Esdras the priest brought the law before the multitude of men and women, and all those that could understand, in the first day of the seventh month.

3 And he read it plainly in the street that was before the water gate, from the morning until midday, before the men, and the women, and all those that could understand: and the ears of all the people were attentive to the book.

4 And Esdras the scribe stood upon a step of wood, which he had made to speak upon, and there stood by him Mathathias, and Semeia, and Ania, and Uria, and Helcia, and Maasia, on his right hand: and on the left, Phadaia, Misael, and Melchia, and Hasum, and Hasbadana, Zacharia and Mosollam.

6 And Esdras blessed the Lord the great God: and all the people answered, Amen, amen: lifting up their hands: and they bowed down, and adored God with their faces to the ground.

8 And they read in the book of the law of God distinctly and plainly to be understood: and they understood when it was read.

9 And Nehemias (he is Athersatha) and Esdras the priest and scribe, and the Levites who interpreted to all the people, said: This is a holy day to the Lord our God: do not mourn, nor weep: for all the people wept, when they heard the words of the law.

10 And he said to them: Go, eat fat meats, and drink sweet wine, and send portions to them that have not prepared for themselves: because it is the holy day of the Lord, and be not sad: for the joy of the Lord is our strength.

11 And the Levites stilled all the people, saying: Hold your peace, for the day is holy, and be not sorrowful.

12 So all the people went to eat and drink, and to send portions, and to make great mirth: because they understood the words that he had taught them.

9 The justices of the Lord are right, rejoicing hearts: the commandment of the Lord is lightsome, enlightening the eyes.

10 The fear of the Lord is holy, enduring for ever and ever: the judgments of the Lord are true, justified in themselves.

11 More to be desired than gold and many precious stones: and sweeter than honey and the honeycomb.

1 And after these things the Lord appointed also other seventy-two: and he sent them two and two before his face into every city and place whither he himself was to come.

2 And he said to them: The harvest indeed is great, but the labourers are few. Pray ye therefore the Lord of the harvest, that he send labourers into his harvest.

3 Go: Behold I send you as lambs among wolves.

4 Carry neither purse, nor scrip, nor shoes; and salute no man by the way.

5 Into whatsoever house you enter, first say: Peace be to this house.

6 And if the son of peace be there, your peace shall rest upon him; but if not, it shall return to you.

7 And in the same house, remain, eating and drinking such things as they have: for the labourer is worthy of his hire. Remove not from house to house.

8 And into what city soever you enter, and they receive you, eat such things as are set before you.

9 And heal the sick that are therein, and say to them: The kingdom of God is come nigh unto you.

10 But into whatsoever city you enter, and they receive you not, going forth into the streets thereof, say:

11 Even the very dust of your city that cleaveth to us, we wipe off against you. Yet know this, that the kingdom of God is at hand.

12 I say to you, it shall be more tolerable at that day for Sodom, than for that city.

The readings on this page are taken from the Douay-Rheims Catholic Bible. You can also read the Mass Readings taken from the New Jerusalem Bible, which is used at Mass in most of the English-speaking world. (References, Copyrights).
◄ October – 2 October – 4 ►
ByPradeep Augustine
Print
Facebook
WhatsApp
Twitter
Pinterest
Linkedin
Email
Telegram
LINE
Viber